It's been a long time since we added new functional features to NetBalancer and today is the day: NetBalancer 9.11 can limit the maximum number of packets per second that can be sent or received by a connection, process or rule. 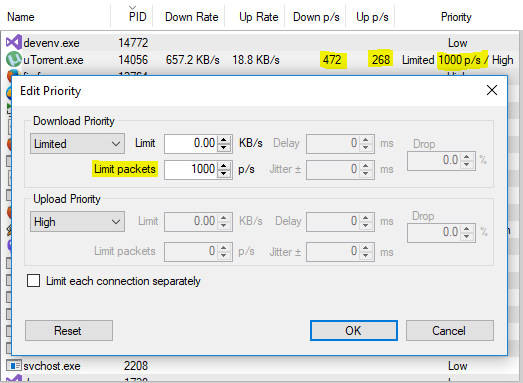 The same for rules, beside the traditional traffic rates are also shown the packet current rates, as on the image below.

The packet limit feature can be used as a simple but quite effective solution against unsophisicated DDOS attacks, when your website or home-hosted game server is flooded with lots of DDOS packets, just limit the maximum amount of packets allowed per connection are you're done.
Of course, this is not the only use, many other use cases are valid too, like slow network testing, various connectivity simulations, etc.