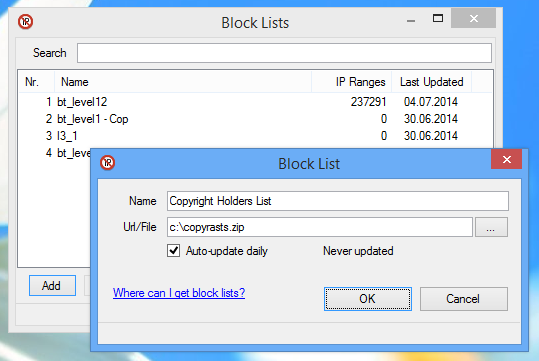 The most important addition to 8.2 version of NetBalancer App is support for Block Lists: lists of IP ranges that can be used to make Rules (menu>Edit>Rules).


They can be used in various ways. For example when I'm out and on my 3G data plan I like to create a rule, named "No Windows Update", which uses the "Microsoft IPs" block list to block any comunication of my laptop to Windows Update, and thus not spending precious traffic on huge updates.

Of course the lists are not limited to blocking only, they can also be used to limit traffic speed, set priorities, delays etc, anything a NetBalancer rule can do with traffic.


Also some other minor improvements were done, the most notable of which is the new Ping information on tray and toolbar windows, which constantly ping google.com and show the results in real-time.